I feel motivated to continue working [in the fields] of social justice and inclusion. 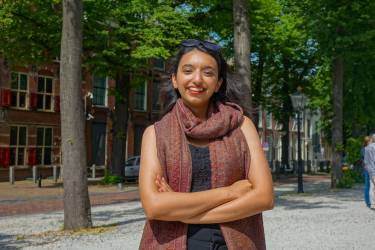 After hearing Fatima Abbas’ story, it is no surprise that her academic path led her to the doors of the International Institute of Social Studies (ISS). Abbas is pursuing a Master’s in Development Studies, currently undertaking the Human Rights, Gender and Conflict Studies: Social Justice Perspectives major.

Abbas begins her story with us in her youth. Originally from Pakistan, she remembers moving quite often due to her father’s involvement in the army. After being stationed in Islamabad, her parents would settle their family in the lush capital where she would attend secondary school. In these formative years, Abbas studied psychology and would later attend university to earn her BSc in Anthropology. She marks this as the start for activating her academic interests:

‘I really fell in love with [anthropology]. It started to open my mind and made me question things I used to take for granted or wouldn't think about. Culture, norms, values — all those things. It really drew me in. It made me realize there was much more out there outside of Islamabad.’

Watch Fatima in this video

Like most undergraduates she was met with the post-bachelor’s identity crisis, asking the age-old question: ‘what’s next?’. What she knew for certain is that she wanted job experience. ‘I realized after I graduated, it was a bit difficult to realize where to go from thereon. I think that was a tough time figuring out what I wanted to do and where I see myself going. I wanted to work in the development sector.’ After undertaking two roles in education, Abbas took a bold step to look for other opportunities. This led her to do an internship at the Pakistan branch of Oxfam International in their Gender Justice department. Coincidently, that is also where she learned about ISS’ programming in a serendipitous chit chat with a visiting colleague from the Netherlands.

She says, ‘I was working on a project on child marriage prevention, and I was getting a lot of exposure of what it meant to work in a development organization and an international NGO. I ran into [a colleague] there while we were making tea for ourselves. We were talking and he asked me about my future. I told him that I always wanted to do a master’s and he said: “Oh, [ISS] is a great institution. You should check it out!”. That was back in 2018. I kept it in mind because I didn't want to apply right away, and I wanted to gain some professional experience.’

And that, she did. After her internship, she landed a job in Karachi with Citizens Archive of Pakistan, an NGO preserving the historical and cultural heritage of Pakistani citizens. This role was no typical 9-to-5. She would work on a project where she would interview those who survived the upheaval during the India-Pakistan partition over tea and sweets, a familiar circumstance that her own family members had faced. These conversations with elderly locals unearthed their painful experiences marred by a legacy of colonialism and interstate violence.

'I hadn't studied feminism formally, and [at ISS] I got to finally dive deeper into the different kinds of feminisms that exist.'

On the ISS experience

Her experience as a young professional directed her to cross the paths of influential women who left a profound impact. In large part, these meetings impacted her choice to apply for the Social Justice Perspectives major. ‘I got to speak with this woman who had become the first high court judge in the province of Sindh, her experience of studying law as the only woman in a class full of men, and how she broke those stereotypes. I think there has always been a gender dimension to much of the work I do.’

She is part of the 2020-21 cohort whose academic year has been complicated by the pandemic. Although this semester has been difficult to navigate, she tells us that she is enjoying the courses and the theoretical perspectives she has gained so far. ’Academically, I've been really liking the way we are taught about development and feminist perspectives. I hadn't studied feminism formally, and I got to finally dive deeper into the different kinds of feminisms that exist. One course I am taking is called Gender and Sexuality, and that’s been interesting and making me question things I never thought of. Another course I really like is Transitions to Social Justice Lab. That's exposing me to new theories of post-development and decoloniality.’

Abbas now heads into her MA thesis with two different research paths in mind. She says, ‘I have a lot of different things that I am interested in like gender fluidity in pre-colonial India and how it was policed with the onset of colonization. I am also looking at transgender rights in Pakistan today. Recently, we had a legal act passed two years back which guaranteed some fundamental rights, so one idea I have is to look at the politics of citizenship and identity in Pakistan regarding transgender identities. It was quite funny because after hearing about gender fluidity, my supervisor advised me to narrow down my [thesis] topic, but I ended up expanding it even more!’

'I feel motivated to continue working [in the fields] of social justice and inclusion.'

Abbas, jovial and multifaceted, has a bright future ahead. And, she keeps busy, to say the least. She is currently undertaking an internship as a creative researcher at a local science and cultural museum in The Hague in combination with doing her master’s thesis. She is keen on any opportunities arising as they come, but she knows that her career path will be rooted in inclusion and social justice efforts: ‘I am a Muslim, but I also belong to a minority sect in my country, the Shiite community. Although it is the largest minority group in Pakistan, there is a lot of discrimination and marginalisation against the community. Even regarding other communities, I feel motivated to continue working [in the fields] of social justice and inclusion.’

Interested in our programmes after hearing Fatima's story? Learn more about our MA in Development Studies programme.