Interesting things will only happen if you're willing to listen 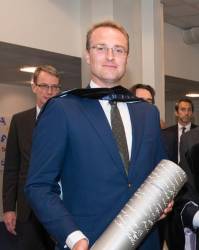 ISS PhD graduate from the Netherlands

After completing his PhD in 2017, Selwyn Moons moved into consultancy. Here he tells us about his PhD research, his current work and how studying at ISS influenced his career.

What was your PhD thesis about?

‘My dissertation was about the influence of government on international trade and investment. I was also interested in whether it mattered at all and curious whether there are differences between countries in this respect. The influence of governments on trade and investments is not so big if the countries are culturally close to each other, for example when trading between the Netherlands and Germany. But the influence is much greater when there are large differences between countries, such as between the Netherlands and China.’

What did you gain from ISS?
‘From 2005 to 2017 I worked in The Hague, at various ministries. I did my PhD entirely alongside my full-time job. I was not often at ISS, as little as possible actually. I had contact with only a small group of people at ISS. In addition, I worked more than forty hours a week at the ministry. But ISS gave me the opportunity to do my PhD. And I received very good guidance from my supervisor, Professor Peter van Bergeijk. He also took into account my irregular, busy work schedule. I had to find a kind of cadence in which I could keep working and studying, and ISS and Peter made it possible for me to do this. My defence was fun, many people attended, even ministers came along. The thesis was also well cited. Together with Peter I wrote another handbook on economic diplomacy, which came out in 2018.’

‘ISS and my supervisor, Peter van Bergeijk, made it possible for me to work and do my PhD at the same time’

How has your career progressed since then?

‘Doing a PhD was an adventure for me. Six months after my PhD, in January 2018, I switched to PricewaterhouseCoopers (PwC). After thirteen years in government, I wanted to see if I could make it in the commercial sector. And I can say it is going well: I've now taken on 25 people. Working here is a bit freer than working for the government. In a way, it resembles academia. We also do independent research. If you work for the government, you have to propagate the minister's policy, and the minister is always responsible for what you do. In this job I am responsible for what I do and I like that.’

In what way do you benefit from the ISS PhD in your current work?

‘I have always been very curious. Up until the completion of my dissertation, I was writing articles and doing research. I am glad that I was able to translate that curiosity into a dissertation. You need that curiosity - that's what keeps you going. No dissertation is fun every day. How do you create insights? How do you recognise patterns? In my current work I try to work as factually as possible; I got that from my academic background.’

‘My most important tip to ISS students: look around broadly, you can really go in all directions’

Do you have any advice for ISS students?

‘I am the only one I know of from ISS who ended up outside the government, academic sector or development work*. I have not chosen a logical career path in any case. Some people have a negative image of consultancy. I, however, experience it as a great and useful job because I can think about public sector issues as in independent outsider. I also like the open and transparent culture. My most important tip for ISS students is therefore: look around broadly. You can really work in all directions. It is interesting, both for yourself and for the world, to look into the commercial sector as well. Or go to the Ministry of Economic Affairs instead of Development. I am a great advocate of thinking outside the box. Interesting things will only happen if you are prepared to listen.’

Where is Selwyn now?

Alumnus Selwyn Moons is a partner at the consultancy firm PricewaterhouseCoopers (PwC).

He focuses on services to ministries and state implementing-organizations in the field of crisis management and subsidy and financing issues. Prior to this, he worked in the public sector for twelve years.

He can be contacted at selwyn.moons@pwc.com.