I speak on behalf of my inner-child. 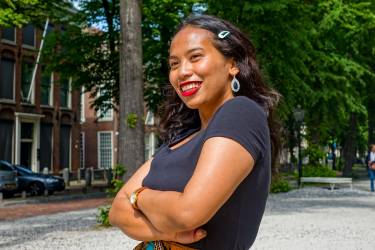 (The following profile addresses the topic of sexual violence. We understand this content may be difficult for many. We advise you to read with caution for your wellbeing.)

Dina Chaerani was sure that she would pursue her graduate degree at the International Institute of Social Studies (ISS). She even knew the major and specialization that aligned with her goals at the age of 14. The Social Policy for Development (SPD) major, specializing in Child and Youth Studies. Dina is ambitiously pursuing a career in gender and child and youth participation and protection. She is maintaining her work as founder of the burgeoning mobile app, Lapor Yuk!, a reporting tool for survivors of sexual violence in Indonesia.

When speaking with Chaerani, we learn that her aspirations are rooted in personal experience. The SPD student is originally from Indonesia, growing up in the coastal city of Jakarta. Her original path veered far from her current interest in development studies. 'I had a very chaotic experience because when I was in [secondary] school, I studied accountancy.' While in school, Chaerani became a beneficiary of Plan International's branch in Indonesia and participated closely in anti-harassment programmes.

It was at Plan International that a new field of interest grew.' I got a lot of training in gender and children participation and child protection,' she says. 'I felt like, oh, I really like the field of gender and child participation.' Chaerani was inspired by the field's core aspects, namely children and youth being valued for their views and opinions. She decidedly no longer wanted to pursue accountancy in university but, instead, would apply for a degree in the social sciences. During her tenure as a beneficiary at Plan, she learned about ISS:

Watch Dina in this video

But, according to Chaerani, this did not come without struggle. 'I applied [for university], but I got rejected. It was kind of hard. I continued to apply, but my last option was to pursue a German Language Education degree.' She was eventually admitted, and although she wasn't accepted on her desired terms, she took great interest in learning a new language and found the opportunity to study abroad in Germany.

Chaerani was a diligent undergraduate student, participating in youth panels and working at Plan Indonesia while keeping up with the rigorous expectations as she neared the end of her studies. During her third year, she devised an idea with her friends to create the mobile app Lapor Yuk! to prevent sexual violence against children and youth. The app, only available in Indonesia, is another route for children and youth to report instances of sexual violence that they have witnessed or experienced.

Chaerani believes that digitizing the process helps people, particularly girls and youth, navigate the stigma of sexual assault and report it anonymously. 'In Indonesia, we have very low process of reporting mechanisms,' she clarifies. 'You first have to report it to the lowest level, and then it will move to regency level, and then it will go to the national level until it goes to the judicial process. I see that many girls and children don't want to report because there is stigmatization. They don't know the mechanisms or to whom they should report.'

Impassioned, she also explains her connection to the app's purpose. 'When I was in junior high school, I experienced sexual violence as well. I reported to my teacher, and they asked me irrelevant questions. They asked who did it to me, and I didn't remember. He even said that I must've enjoyed it. I wasn't brave enough to tell anyone else, and I kept it a secret for seven years until I received a lot of information and training on this topic and became strong enough.'

Now she collaborates with several institutions to implement Lapor Yuk! as an alternative reporting route. 'You can download [the app] and click the bottom when you or someone you know encountered sexual violence. The app leads you to the specific institution to alert. For two years, I worked together with the police department, the hospital, and other institutions for reporting. Now, it has been applied by one of the regencies in Indonesia.'

'I want to combine my research with agency, looking at how children can feel safe to report [sexual violence].'

Into the research process

Chaerani is happy to continue her dream of attending her first-choice master's programme at ISS, focusing on Child and Youth Studies as an SPD major. For her master's thesis, she decided to stay close to her passion of child and youth protection by conducting research on Lombok Island. Her research (which she shares is entitled 'Conquering Fear') hopes to contribute to research on stigmatization and children’s agency when reporting sexual violence. 'We already know it's about fear, stigmatization and victimization that is happening to victims when they report cases. I want to combine my research with agency, looking at how children can feel safe to report and that they have their own agency to report it.'

A positive aspect of her study experience has been the opportunity to take cross-cutting courses from the other majors at ISS. This allowed her to learn about policy evaluation more broadly, a benefit for her thesis. 'When I was entering the second term, I found that the courses from GDP were more relatable for me.' she says. 'I found it beneficial to choose courses in the [Governance and Development Policy] major, because it complemented my study and specialization. I took the public policy courses, and now I can relate it to youth and children.'

'...I don't want to see other girls or boys encounter the same experience I was in.  I speak on behalf of my inner-child...'

When reflecting on her goals, Chaerani dreams big. 'When I was in junior high school, I wanted to be the president of Indonesia,' she says, laughing. Now? 'I want to be the Minister of Women Empowerment and Child Protection in Indonesia because I see that my passion is about children and youth. My thing is that I don't want to see other girls or boys encounter the same experience I was in. I speak on behalf of my inner-child because I wasn't brave enough to tell on my perpetrator.'

After graduation, she wants to build her career in humanitarian and grass-roots organizations that she believes are working effectively across the regions in Indonesia. In addition, she hopes that the data revealed in her thesis will help her expand on the success of Lapor Yuk! in the future. She tells us, 'I believe my [research] will be a stepping- stone to expand the app that I created, and the research data will help me expand upon my app. In Indonesia, the government aims to be more child-friendly by 2030. This would expand to all 416 regencies. I want to use that as well as my agenda. I say, let’s do it!'

Interested in our programmes after hearing Dina’s story? Learn more about our MA in Development Studies programme.